Review of the affordable smartwatch FitOn that can measure even blood oxygen saturation!!


Recently, I was sent a sample of a smartwatch and I want to share my review of it today. That smartwatch is FitOn which has already reached its funding goal on Kickstarter. Interestingly, the smartwatch was developed by former employees of Withings, Garmin and Huawei.

Speaking of blood oxygen saturation, it’s well known that the big giant Apple is said to be working on installing the feature on Apple Watches. In other words, FitOn achieved the installation faster than Apple. Hmm…Interesting.

To make matters more surprising, the price is just $49 on the Kickstarter campaign now. The regular price will be $79, which is still very reasonable.

I know that you can’t believe what I’m saying now… You can’t believe that such a fancy smartwatch exists with such a reasonable price, right? I understand your opinion. So, let’s test it and review it!

Basic features of the FitOn

The FitOn is compatible with both Android OS and iOS. You connect it through Bluetooth. The basic features of this smartwatch are below.

Yup, that’s it. You can’t expand the functionality by installing apps like other Android Wear devices. You had better remember the fact. Moreover, you have only two watch faces, analog style or digital style. You can’t customize your FitOn fashionably like Android Wear devices, except for the 10 different color bands which the company seems to be preparing.

However, considering the compatibility with both Android OS and iOS, I can understand the limitation of the customization. The company says the battery life is maximally 4 days and has IP68 water resistance feature. 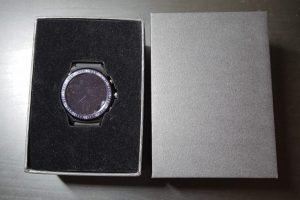 Ok, Let’s unbox it. This is still a sample, so please don’t expect the package to be fancy and pretty. The watch came with a USB cable and a charging adaptor in the small plastic bag. 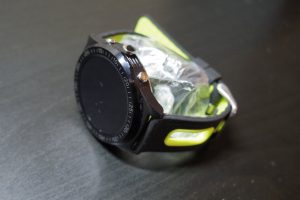 The adaptor has a very unusual shape. It’s like a clip (or a crocodile). You put the watch between the jaws of the charging clip. 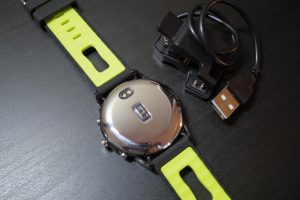 The USB cable is about 30 cm and very short. The small rectangle at the back of the watch is the sensor that measures your heart rate and blood oxygen saturation. Cool.

Design: Personally this is my favorite, except one small thing…

First of all, speaking of the design, I love it. Actually, I’m a fan of a round-shape watch more than square-shape. Therefore, I liked the small (but not too small) and round shaped design of the FitOn. Here is a comparison with my Apple Watch (42mm). 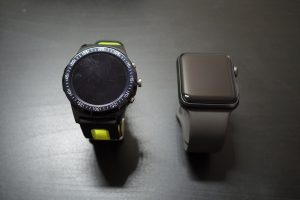 However, there is also a thing that I hate about the design too. The body seems very cheap, more precisely the screen and the side buttons.

The screen seems to be made of plastic instead of glass and it makes a cheap sound when you tap with your fingernails. The screen is not even a touchscreen. You control the watch with the side button. 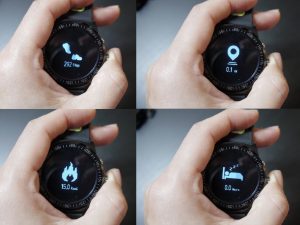 The display (2.43cm x 2.43cm) is OLED and the brightness is great, but it has only 1 simple color as you see in the picture, which gives you a sense of retro or nostalgia. 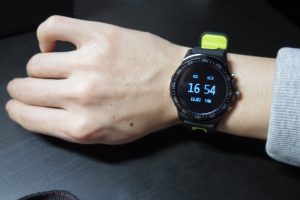 Next, the side buttons are the worst. There are three buttons on its’ side but two of them are just decorative!! You can click only the middle button. I couldn’t believe this… 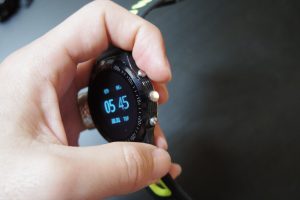 Ok, I can compromise the quality of the screen or display but not the side buttons. This just makes the design horrible. I wonder why the company even install the two useless buttons though…

This time, I used my Android phone as a test device to connect with the FitOn. The app’s design and user interface were awesome. 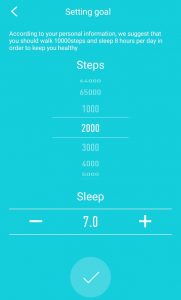 Personally speaking, I prefer this app to iOS’s official health app that I use every day.

At first, you are required to input your age, gender, skin tone, daily steps goal and so on. 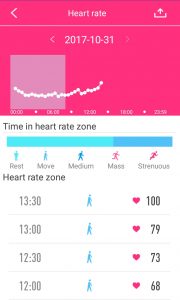 After the first setup, you can check the graphs of your steps, sleep data, heart rate and blood oxygen saturation with a glance. You can go to the running mode and the setting page by switching the tabs.

What I like is that you can set a schedule to enable/disable the “Turn the wrist” feature that turns on the watch by lifting your wrist. Normally, you don’t have to check your watch while you are sleeping, so I think that this is a wise setting feature because it can save the battery too. 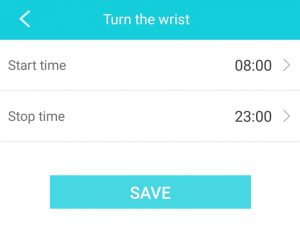 It would be better if the app has the language options but I believe that the company will prepare it in the future. Anyway, I loved the app!!

Performance of the FitOn: It’s more a health tracker than a smartwatch.

Let’s talk about the performance of the FitOn. Honestly speaking, I think that the FitOn is more like a health tracker than a smartwatch. 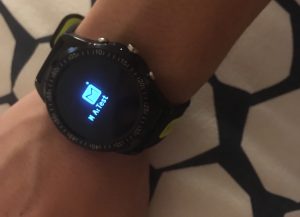 The response of the notification is perfect. There was no lag. It notifies you with (a bit too strong) vibration. 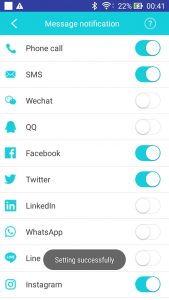 Speaking of the heart rate, the sensor was quite good, I guess. I compared the data of my Apple Watch and the FitOn on the same left wrist and at least they provided almost similar data. 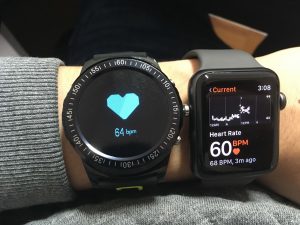 Well, there were a few times that suddenly the heart rate rockest up and sent me alerts despite that I was not wearing the FitOn. That was weird and creepy… I don’t know the reason. But don’t worry. The data during the time you are not wearing the FitOn won’t be registered in the app. 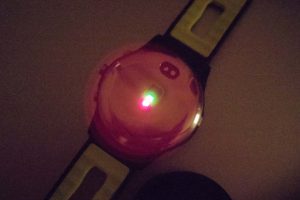 With regards to the blood oxygen saturation, I think that it was working ok. Unfortunately, I had no way to check if the data was correct but, as the standard rate should be between 95% – 99% and my rate is between those, I believe that the measurement was correct because I’m currently healthy (I believe so…). 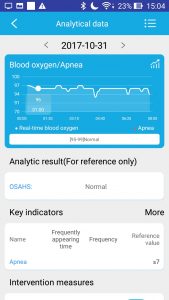 The company said that the algorithm of HRV isn’t ready yet. Therefore, I don’t mention about the data here to be fair.

I wore the FitOn almost for 3 days and want to judge it now. Frankly speaking, the FitOn won’t make those who want a “Smartwatch” happy. You can’t customize your watch face nicely and you can’t use other apps on your watch with the FitOn. I think that you can’t be satisfied with the limited features of the FitOn.

On the other hand, you might like the FitOn as a health tracker instead. Actually, the FitOn is quite nice as a health tracker. The biggest reason to make me feel so is the insanely affordable price too. It costs only $79, man. I hardly hear any health trackers that can measure heart rate, HRV, and blood oxygen saturation for only $79 in the market.

The battery life is as good as the company says, and the IP68 water resistance will be very useful although the sample that I got doesn’t yet meet that standard. 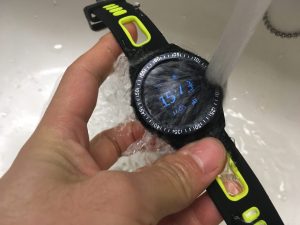 The campaign on Kickstarter is still going on until November 19th in 2017. For now you can fund it for $49 and get one.

Please note, if you are really looking for a proper smartwatch, you might be happier to choose other proper smartwatches (which might cost more though). This is an important hint. Other than that, you will enjoy this affordable health tracker.